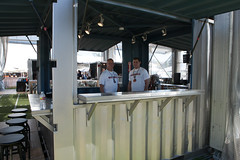 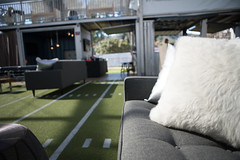 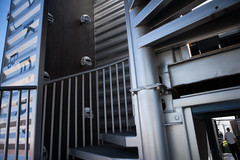 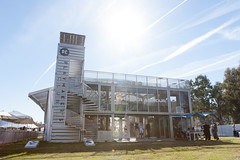 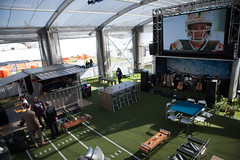 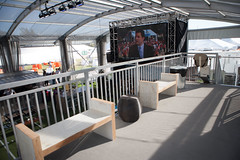 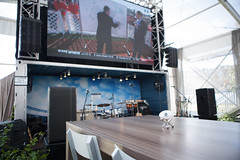 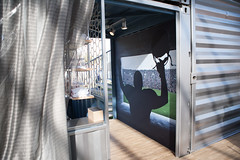 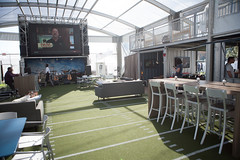 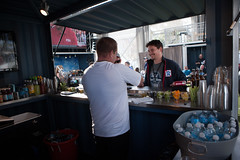 For the 2013-2014 College Football season, IMG College wanted to create an upscale tailgate experience at some of the more prominent football games. Namely, the annual Florida v. Georgia game in Jacksonville, and the Rose Bowl and BCS Championship in Pasadena. Catering to an upscale crowd, the experience had to blend luxury with a classic college football environment. IMG wanted a dynamic structure that could serve food, have games, and offer live music.

We designed a multi-level structure with a 30-foot tower, 4 bars, a stage, an upper level viewing deck, and a 20’ Jumbotron screen. Working with Arenas America, we enclosed the space to keep it climate-controlled, while still maintaining an open and free-flowing environment. The entire footprint was roughly 4500 square feet. Above all, and like always, safety was our top priority. Because of its mobile nature, the PlayMaker’s Club was rated for hurricane winds along the Gulf, snowloads in the Midwest, and seismic activity in the West Coast.

Fans couldn’t miss the PlayMaker’s Club as they walked into the stadium, and those inside of the structures were generally in awe as they experienced a one-of-a-kind tailgating environment. It’s safe to say that the PlayMaker’s Club effectively changed VIP hospitality forever. But don’t take our word for it, watch the video to hear what fans and IMG representatives have to say.